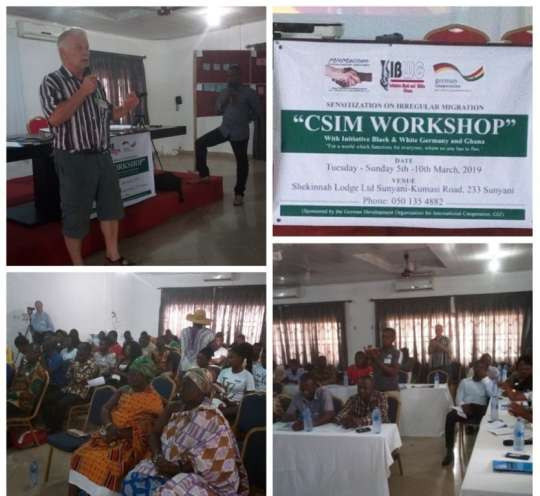 Tanoso (A/R), Mar. 12, GNA – About 226 irregular migrants from Africa have perished on the high seas between January and February this year, reports from the Black and White Initiatives in Germany and Ghana, has revealed.

They were traveling through the Mediterranean Sea to seek greener pastures abroad, said Mr Joseph Tapena, the Project Coordinator of Black and White Initiatives a German-based non-governmental organisation (NGO) with a Chapter in Ghana.

In an interview with the Ghana News Agency (GNA) on the sidelines of a sensitization workshop on irregular migration at Tanoso in the Tano North Municipality of the newly-created Ahafo Region, Mr Tapena said 5,483 irregular migrants from Africa died on the high seas in 2018.

Globally, more than 1.5 million irregular migrants died in 2015, with about 10,087 of them being Africans journeying through the Mediterranean Sea to Europe.

The NGO in collaboration with the Sunyani Youth Development Association (SYDA) organised the six-day training workshop for selected teachers and traditional rulers from the Sunyani and Tano North Municipalities.

It was aimed at educating the participants about the dangerous effects of irregular migration to empower them with the knowledge and skills; and the need to educate the youth in their respective communities.

Mr Wolfgang Lieberknecht, the Founder of the NGO, said the European Union has banned irregular migration and advised the youth to avoid such hazardous voyages.

He called on African governments to formulate and implement pragmatic and effective economic policies to build their economies to create jobs for the youth to discourage them from traveling illegally.

Mr Atta Akoto, the President of SYDA, appealed to the government to make agriculture an attractive vocation such that the unemployed youth would participate in it.

He said employable skill training is an area that could end the teething youth unemployment situation in the country and pleaded with the government to invest in that sector as well.

The fortress the termites build