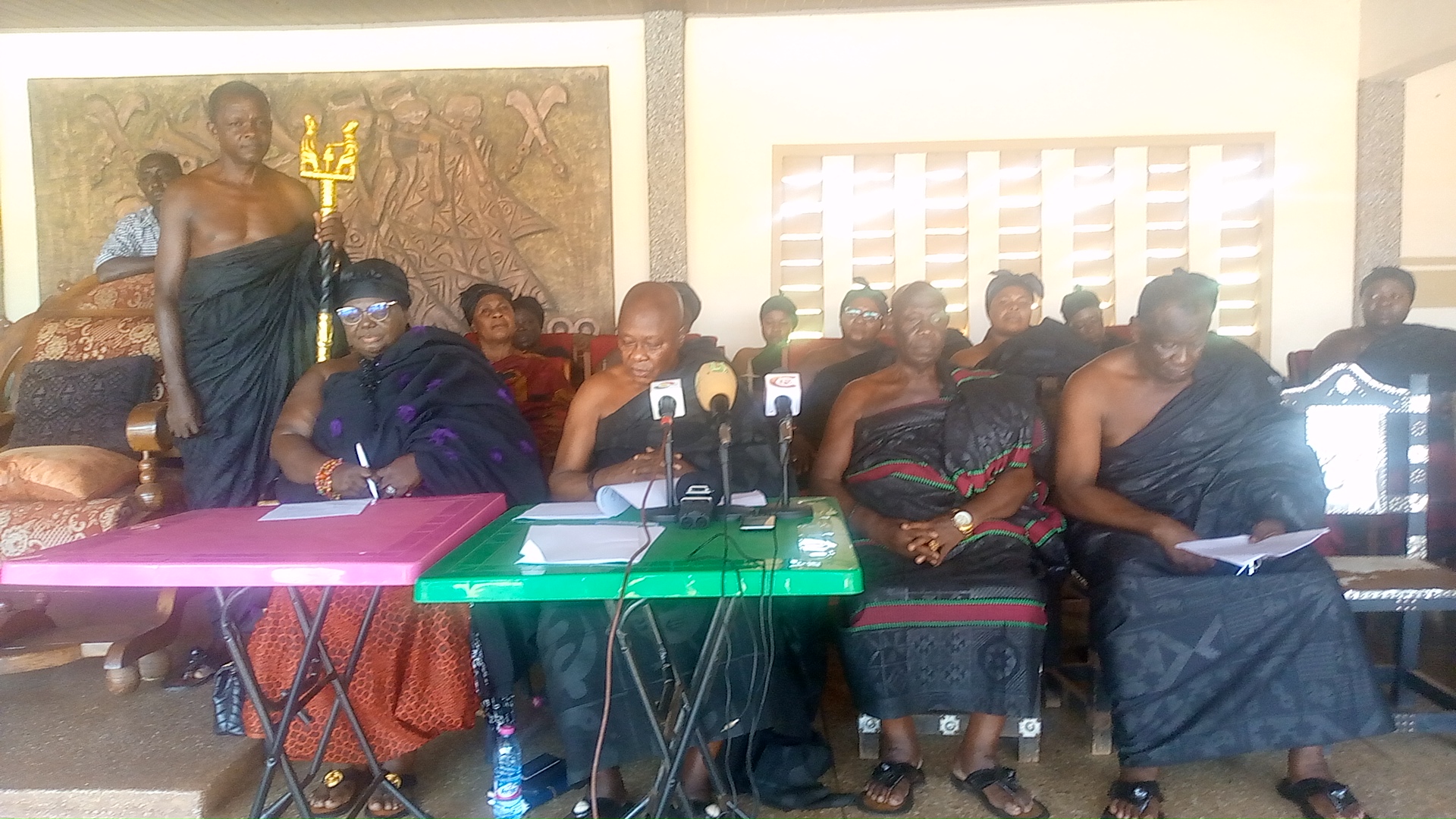 Respect The Law Court, Keep Off Our Lands – STC to Fiapre Chief

The Sunyani Traditional Council (STC) has ask Obrempong Professor Kyem-Amponsah II, the Vice-Chancellor of the Ghana Communication Technology University and Chief of Fiapre to respect the Law Court of Ghana and keep lands under litigation.

According to Council, Nananom of Sunyani have noted an attempted takeover of parts of Sunyani land by the Fiapre Chief, therefore cautioning him to to stop, saying, “Sunyani has no boundary with Fiapre, keep off”.

Nana Kwaku Sarbeng Ababio, the Akwamuhene of the Sunyani Traditional Area gave the warning when addressing a news conference at the Traditional Council on Thursday.

Nana Sarbeng Ababio said Nananom of the STC have learnt of some youth of Sunyani tearing down sign posts on Sunyani land that was erected by some people of Fiapre to promote a said Festival by Obrempong Prof. Kyem-Amponsah II as the Chief of Fiapre.

Fiapre is located right after the University of Energy and Natural Resources (UENR) in Sunyani on the Sunyani-Nsuatre road, but the area is political administratively a suburb of the Sunyani West Municipality.

According to Nana Sarbeng Ababio, the said youths that ripped the sign post made a statement to prevent any attempted takeover of any part of Sunyani land by Fiapre and noted the unfortunate happenings can lead to a state of catastrophe if left to continue without the intervention of the STC.

Nana Sarbeng Ababio stated “the area in question is even a disputed area with the case at the Law Court”.

Nana Sarbeng Ababio recalled that the area “was a vested government land which a compensation of £5 was paid by one ‘Captain Feel’, the then governor of Western Ashanti to the STC in 1906”.

He said “we of the STC are aware of a land dispute in contention with Fiapre on one part and the STC, the Lands Commission and the Catholic University of Ghana on the other part in the law court”.

“The Fiapre Chief needs to respect the law court of Ghana because his incessant actions depict his disrespect towards our court”, Nana Sarbeng Ababio stated.

Nana Sarbeng Ababio said “according to history and archival records, Sunyani Stool does not share boundary with Fiapre Stool anywhere, therefore the conduct of the chief to unilaterally set and determine boundary between the two stools is provocative”.

He stressed “we want to state categorically that the action by the Chief of Fiapre is infuriating and at this moment that some youths have expressed anger and are disgusted by the disrespect of the Fiapre chief against the Stool and people of Sunyani, he must put his unlawful actions to stop immediately”.

“We as a traditional authority have tactfully dealt with this issue in the interest of peace and coexistence to avert any untoward situation, therefore he must abandon the expansionist agenda he has been nursing and pursuing in this modern era”.

Nana Sarbeng Ababio notes the situation is getting murky and can spark an unfold disaster if the STC does not step in.

“We hereby call the Fiapre Chief to order and instruct him to immediately cease any attempt being made to claim part of Sunyani Land”.
“We shall not allow Fiapre to own any area, not even the size of an ant hole on Sunyani land”, Nana Sarbeng Ababio emphasized.

“We the members of the Council and youth have a sacred duty and responsibility to the living, the dead and generation unborn to protect Sunyani Stool lands bequeathed to us by our forefathers”.

Nana Sarbeng Ababio stated “we know our boundaries, if part of Sunyani land is by political administration called Sunyani West, the mere fact that Fiapre is in Sunyani West does not give the chief any power to make claims to land belonging to the Sunyani Stool”.

The STC therefore called on “the National Security and the Regional Security Council to swiftly advise Obrempong Prof. Kyem-Amponsah II not to make any attempt in celebrating his said Festival, tread on any portion of Sunyani land or try to undertake any customary rite on any part of Sunyani land, else he will have himself to blame”.

Nana Sarbeng Ababio assured the angered youth that Nananom have taken some action on the matter and shall not allow anybody albeit whatever connection or take  whatever does not belong to him.

“We understand your frustration and anguish, but we are assuring you that we shall not let Sunyani lose even a centimetre of its land to Fiapre Chief”.