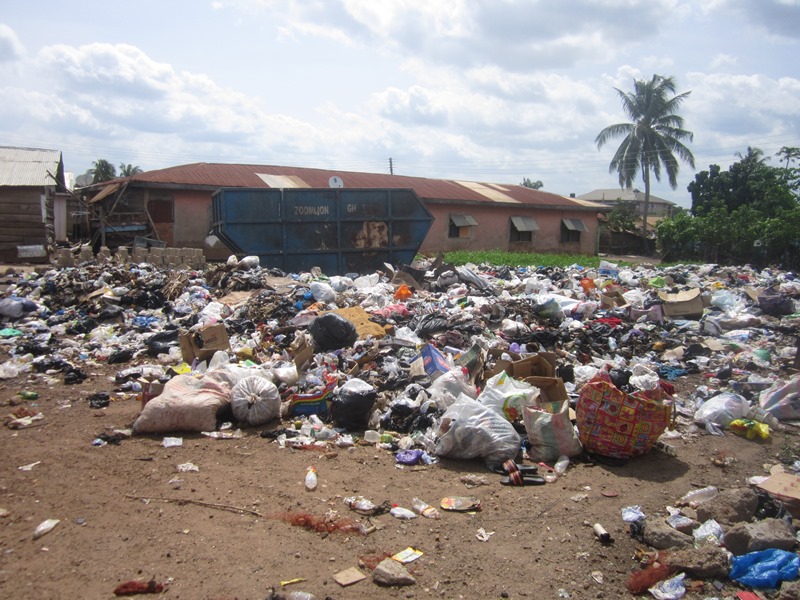 The Sunyani Youth Development Association (SYDA) has lamented over the level of filth engulfing the Sunyani Municipality.

The Association finds it worrying after touring some areas within the municipality of which containers use for keeping refuse were left uncleared—making residents dump refuse on the ground.

“This is a very bad situation, we have been to Area 1, 2, 3 and 4, Wednesday Market, Penkwase, Penkwase Low-Cost and other vicinities and what we saw do not paint a good picture as far as sanitation is concerned,” the Association President, Mr Atta Akoto Senior stated.

According to SYDA, the recklessness and negligence of authorities in handling sanitation issues can lead to disease outbreaks if care is not taken.

The group stressed that the situation will worsen as the rain begins to set in.

“The authorities should up their game and help solve this immediately. It poses a huge health threat,” The General Secretary of SYDA, Nana Akomea Sakyi added.

A notice was filed on a cement block that the refuse container has been relocated, but where the container can now be found was missing in the notice at the Penkwase Low-Cost dump site—comparing some residents to still dump refuse on the ground.

The SYDA team also came across a public toilet at Penkwase, close to the High Street JHS—of which its roof was ripped off following heavy rainfall. Weeks after the incident, nothing has been done about it and operators at the toilet are still at work, collecting money from some residents who still want to use the facility despite its current state.

All efforts to get some Municipal authorities to comment on this issue proved futile as the time of filing this report.